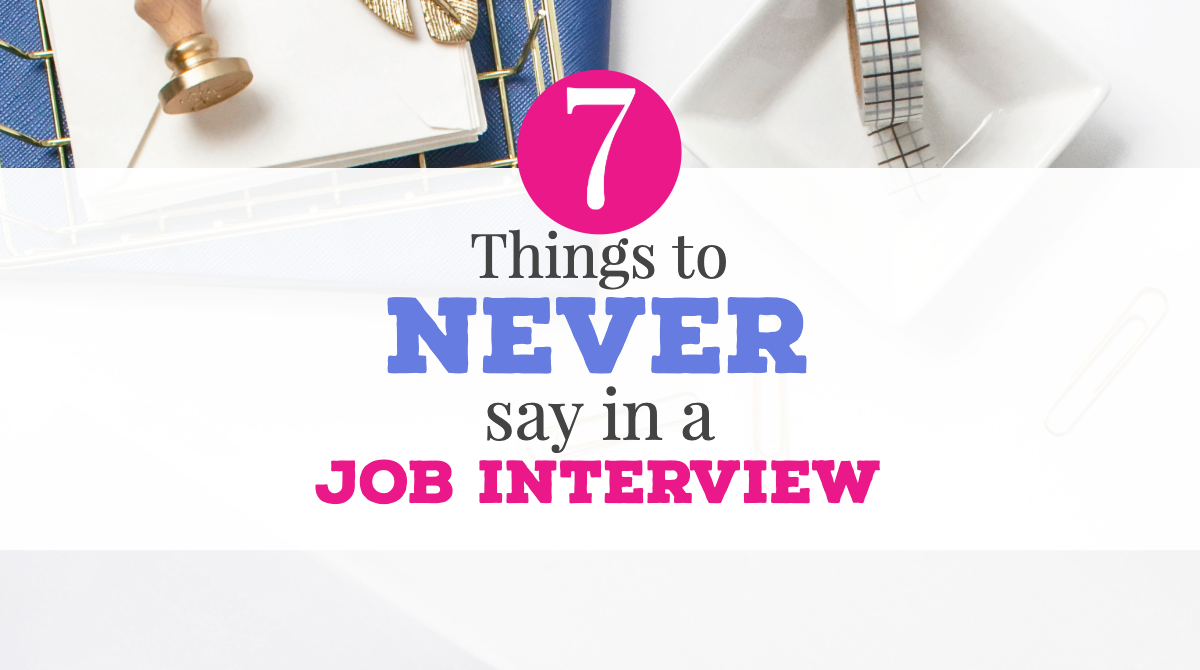 Knowing what not to say in a job interview is just as important as knowing how you will answer old-faithful questions like, “Where do you see yourself in five years?” Of course, you want to cast yourself in the best light possible, while still being honest and true to yourself—but you don’t want to shoot yourself in the foot, either.

Here are 7 things you should never say in a job interview:

1. I was captain of my high school football team (or anything else related to high school)

Despite what your parents and teaches might have said, high school does not prepare you for the job market. No one in the corporate world will care about your high school achievements, even if you captained the football team, lead the cheerleading squad, creamed five districts on debate team, and was voted prom queen, all in the same year.

Fifty years ago, having a high school diploma was meaningful in the workplace—not everyone made it through high school. Today, though, most workplaces expect you to have adult experiences to talk about in interviews. Talking about high school makes you seem immature. Let it go.

Instead, talk about your volunteer work, or the startup that you rocked while finishing high school or college. Talk about internship experiences, or transferable skills you gained from your first job.

If you don’t have anything at all other than high school to talk about, it’s time to think about strengthening your experience by taking an internship or volunteering somewhere. Get out into the world, make connections, and frame your experiences in terms the employer will want to hear.

Your age is none of your potential employers’ business—at least not at the interview stage. By law employers cannot discriminate based on age, but what’s to prevent them forming an opinion of you when you come right out and tell them in an interview? And why would you be talking about this anyway?

Again, focus on talking about your experiences that will make you the perfect employee. Leave age out of it!

If you are pregnant, you know you will need some time off in the relatively near future. It may seem honest to just tell your employer up front that you’re pregnant, but you really shouldn’t. Again, employers can’t discriminate based on your pregnancy, but they may be tempted to hire a less-qualified candidate just because they know they won’t have to cover that candidate’s workload while they’re on maternity leave.

After you’re hired you can have a conversation with your boss about your pregnancy and anticipated maternity leave.

Don’t talk about politics at work, especially not in an interview. Unless you’re joining a candidate on the campaign trail, your political leanings are not your employer’s business. You’re sure to offend someone with your political views regardless of which party you claim as your own.

7. I will need Sundays off for Church

Your religion isn’t your employer’s business either, and could lead to discrimination if you reveal it. If you are going to need a day off to worship, just let your employer know you’re unavailable that day. They don’t need to know the reason.

Exceptions to the Rule

For every one of these rules, there is an exception. For example, if you are applying for a job as an assistant football coach at your local high school, your employer will be interested to know that you were captain of your high school football team. If you are applying for a job at a religious institution (that specifically follows your chosen religion), you can reveal your religion without fear.

The point is, focus your job interview responses on your experiences that make you a great hire. You only have a few minutes to impress the hiring committee—make the best of them by staying on topic, making eye contact, and showing them you’re the best person for the job!