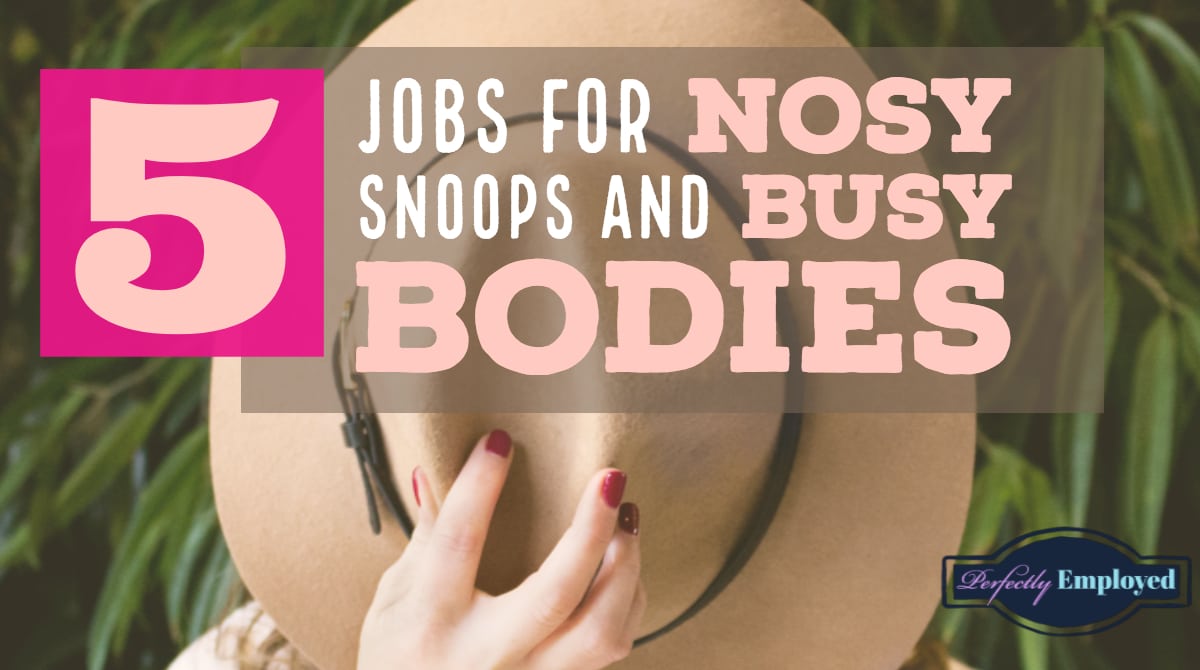 A right to snoop is something only Sherlock Holmes is allowed. Everyone else should be humble, unassuming, and believe what they are told. Being nosy is a nasty habit…or is it?

The truth is that a small amount of curiosity is normal. Some people can’t help but dig a little deeper and read between the lines. Far from being reproachable, it’s a fantastic quality to have in some career fields. Sure, regular bosses usually hate the idea of people stepping out of line, but these roles are different.

They are the type of positions that don’t hold back your natural inclination; they release it in full force. Here are the jobs that will make your nosy heart melt with contentedness.

Companies need quality employees yet they don’t have time to waste. As such, they hire experts who can provide the best candidates in a matter of weeks to limit turnover time. These professionals are called recruiters and are often referred to asheadhunters. You never contact them; they get in touch with you. That’s why curiosity is integral to the role.

For starters, this position requires you to read between the lines and spot the workers who are head and shoulders above the rest. Going off hearsay and industry gossip is a surefire way to hire the wrong person. Plus, it’s important to understand the person behind the mask to ensure they will be a good fit. Depending on the recruiter, this can involve spying on their social media accounts and combing through their tweets. Think of it like one of those moments Sherlock Holmes stalks someone in one of his disguises to find out their business.

Finally, a face-to-face meeting is where you can use background research to push them and learn more. If you think a headhunter is like a spy, then you’re not far wrong. They want to find out everything they can about potential individuals. The more they know about you, the better they can match you to a position. A position that gives them a piece of the action. Let’s just call that the snoopers fee.

The job of a news reporter orjournalist is to keep the establishment honest. People in power do things to abuse their position and increase their lifestyle, often at the expense of the public. Anyone who needs an example of this should take a look at the work of the Washington Post and New York Times. Their constant reporting is often widely referred to by other networks. In fact, the special counsel is believed to use their contacts in the media to uncover suspicion of collusion.

Journalists get a terrible reputation. This is mainly because hacks exist and people don’t understand the position. Gossip reporting isn’t the gold standard by any means, and it’s not something kids dream of becoming as a youngster. Regardless, being a reporter includes fact checking on sensitive and personal info to uncover the truth. For those who don’t believe everything they read, this is a wonderful career choice. Maybe you can be the one who breaks the news and influences public opinion thanks to your nosiness. Just remember, not everyone thinks like a Holmes.

As the name suggests, this role requires an expert grasp of numbers. To find the truth, people will tell you to follow the money. This is where the men and women of forensic accountancy come into play. With their pencils and rolls of paper and calculators, they poke and prod and investigate. If there is anything slightly untoward – fraud, say – then these are the folks that tend to crack the case. Who would hire such a person? It isn’t as if a felon boss is going to hand out a job that puts them in jail. However, some companies are obsessed with financial crimes and these are the ones that will want your services.

An insurance company is a prime example. Although their policies have been less than stellar in the past, the majority do pay out when necessary. Sadly, lots of policyholder’s attempt to defraud them of millions with a couple of simple lies. Thanks to a curious soul such as you, opportunists won’t get very far. Of course, the IRS is the pinnacle of forensic accountancy. If you run into obstacles, try embracing your Moriarty side.

It’s worth noting from the beginning that this is a difficult industry to break into because it’s exclusive. Without the right qualifications, there isn’t a research facility in the world that will take a chance on an employee. Consider this. Do you want someone working on your health that’s missing certain bits of information related to your physiology? That being said, the ones with a medical background can become the ultimate investigators. But, instead of solving crimes, you can prevent diseases from spreading and save lives. This is a bit more Watson, really, but he’s a bit of a snooper too. Holmes just had to catch him up a bit on the whole genius thing.

In many ways, working with experts such asPoseidais better than being a run-of-the-mill police officer. The role includes targeting genomes to try and modify innate behavior. That way the body will be able to fight back against illnesses which are incredibly dangerous. Imagine being one of the people who helped to cure cancer. Not only would it be a historic achievement but it would be due to your curiosity.

A human resources role is by no means as “sexy” as the other positions on this list. But it’s one of the most suitable jobs for people who are curious. For one thing, colleagues interact in inappropriate ways all of the time. The #MeToo movement is just one example.

Secondly, the company has to react professionally for the good of everyone involved. So saying there isn’t enough evidence to rule either way won’t cut the mustard. You will have to investigate by speaking to peers and previous bosses and coworkers to see if there is a pattern that you can prove. Being an HR manager isn’t all boring. In fact, you will likely find challenges you never thought you’d face. Especially if you are a Holmes type. Honestly, when was the last time Sherlock considered someone’s emotions in resolving a situation?

When all is said and done, it comes down to just how curious are you? How do you plan on using your curiosity to get ahead in the business world?