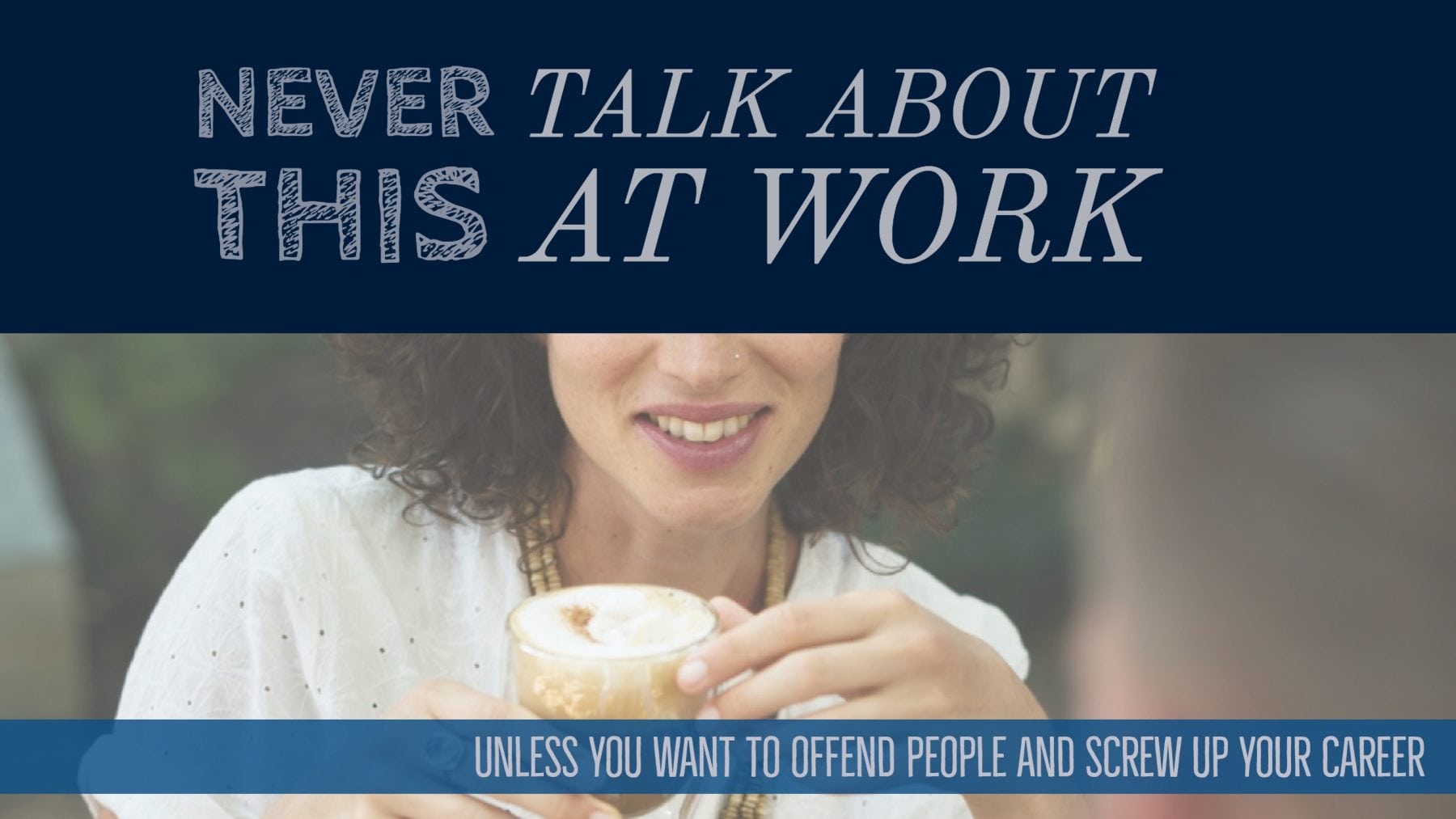 In the age of social media, it’s easy to become used to over sharing. People post their entire lives on the Web, from what they eat for dinner to vacation photos. But, when you’re trying to craft your dream career, you have to be ever vigilant about making the right impression on your boss and colleagues. The truth is, you never know who will be in a position to help you with your career one day.

Crafting the right career image means casting yourself in the role of poised, hard-working, competent professional. That means dressing the part, but also speaking the part. If you want to craft your dream career, you should always avoid these topics at work.

Politics are divisive. Don’t believe me? Scroll through your Facebook news feed. Some people are absolutely appalled that the media is “attacking our president.” Others are appalled that we could elect a “racist bigot” as our country’s leader. It doesn’t matter where your opinions align–the conversation is not office appropriate.

Think about it: What do you feel about people who disagree with you about politics? If you are an evolved, open-minded person who loves political discourse, good for you. You’re in the minority. The truth is, most people take their politics personally, and have a hard time understanding why anyone would disagree. A lot of people are quick to label those who disagree with their politics as “ignorant,” or worse, “immoral.” Do those words describe how you want people to think about you? Would you hire someone you thought was ignorant or immoral? Of course not.

Freedom of speech is a hallmark of Western society. However, this isn’t about your freedoms, it’s about your career. Don’t ruin your reputation over politics.

Banned at the Office: Religion

Religion may be the most divisive topic on Earth. Many wars have been fought over it.

If spirituality is important to you, that’s wonderful. If it brings you peace and belonging, that’s amazing. However, much like with politics, people often have preconceptions about religions that could color their opinion of you if you choose to talk about religion in the workplace.

Remember: You want to be seen as professional, competent, and poised. Don’t say anything that could break that image or burn your bridges.

We all know that person at the office whose life is perpetually falling apart. Their parents are always sick, their siblings are in jail, and their significant other is sleeping with their cousins. Their personal drama is enough to script Days of Our Lives for years.

Now, think about what you think about that person who talks on and on about their personal lives. Do you see them as professional? Competent? Would you recommend them for a promotion? Would you hire them if you had a job opening? Probably not. Keep your personal life out of the office!

The ultimate topic to avoid at the office is sex. No matter if what you’re saying is positive or negative, it’s bound to misconstrued. This is a topic that not only makes you look bad, it could get you fired. Avoid this topic no matter what!